Women in the trades

The trades are no longer the sole domain of men. A study done by the central association of the German crafts in 2021 shows that 18.3 percent of all artisanal apprenticeships in Germany are filled by women and the trend is pointing upwards. We at R+S Stolze GmbH go with times! To us it does not matter who you are but what you can do!

Since last year Yasmin Ospalsky has been apprenticing as an industrial electrician with us. Miss Ospalsky joined our company on 1th August 2021. Previously she successfully completed another apprenticeship as a dental assistant and worked in that field for over 3 years. Because Miss Ospalsky is from a family of craftsmen as a woman, she was never genuinely happy in that job and sought a change of professional scenery. 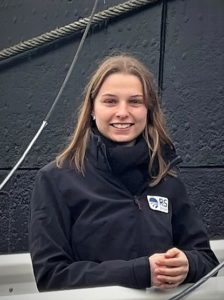 How did she get into the trades?

Her private environment always supported her interested and thus grew the technological understanding as well as the passion for crafting. Miss Ospalsky therefore made the decision to apply at the R+S Group.

Seeing that the trades in general and electronics are still considered a male domain by most people did not bother her.

“When I was younger, it might have been a problem for me but now not at all. It is all a question of self-confidence.” says Miss Ospalsky. She further suggested to invite female employees to present artisanal jobs to potential future apprentices to help overcome barriers in the minds of young women who are interested in the trades.

“Role models play a significant role in overcoming reservations. Especially if a young woman has just graduated from High School and is considering taking up an apprenticeship in the trades it may give her that final push to do it, when she sees another woman who has successfully gone down that path!” she explains.

What does a normal day as an Industrial Electrician look like?

Miss Ospalsky would like to be that role model in the future. After finishing her 2-year apprenticeship she intends to become a Master in the field of industrial electronics and pass the exam for the instructor qualification. Until then she spends her days at R+S Group working on switch cabinets.

Under the guidance of someone who has already successfully completed his/her apprenticeship, Miss Ospalsky learns how to equip these and how to lay cables inside them.

Christopher Spaller, in his capacity as Head of Production, is responsible for all apprentices. He praises the work of Yasmin Ospalsky: “I am very impressed with the structured, organized, and clean way Yasmin works. These attributes are no longer the norm today. This makes me incredibly happy that we took this step forward together with Yasmin.”

Mr. Spaller too would like to encourage young women to consider an apprenticeship in the trades.

“When it comes to heavy physical labour, women are of course at a bit of a disadvantage. But when it comes to technological understanding and skill in crafting, they can compete with anybody else.”

R+S Stolze spares neither costs nor effort to create a proper and pleasant work environment.